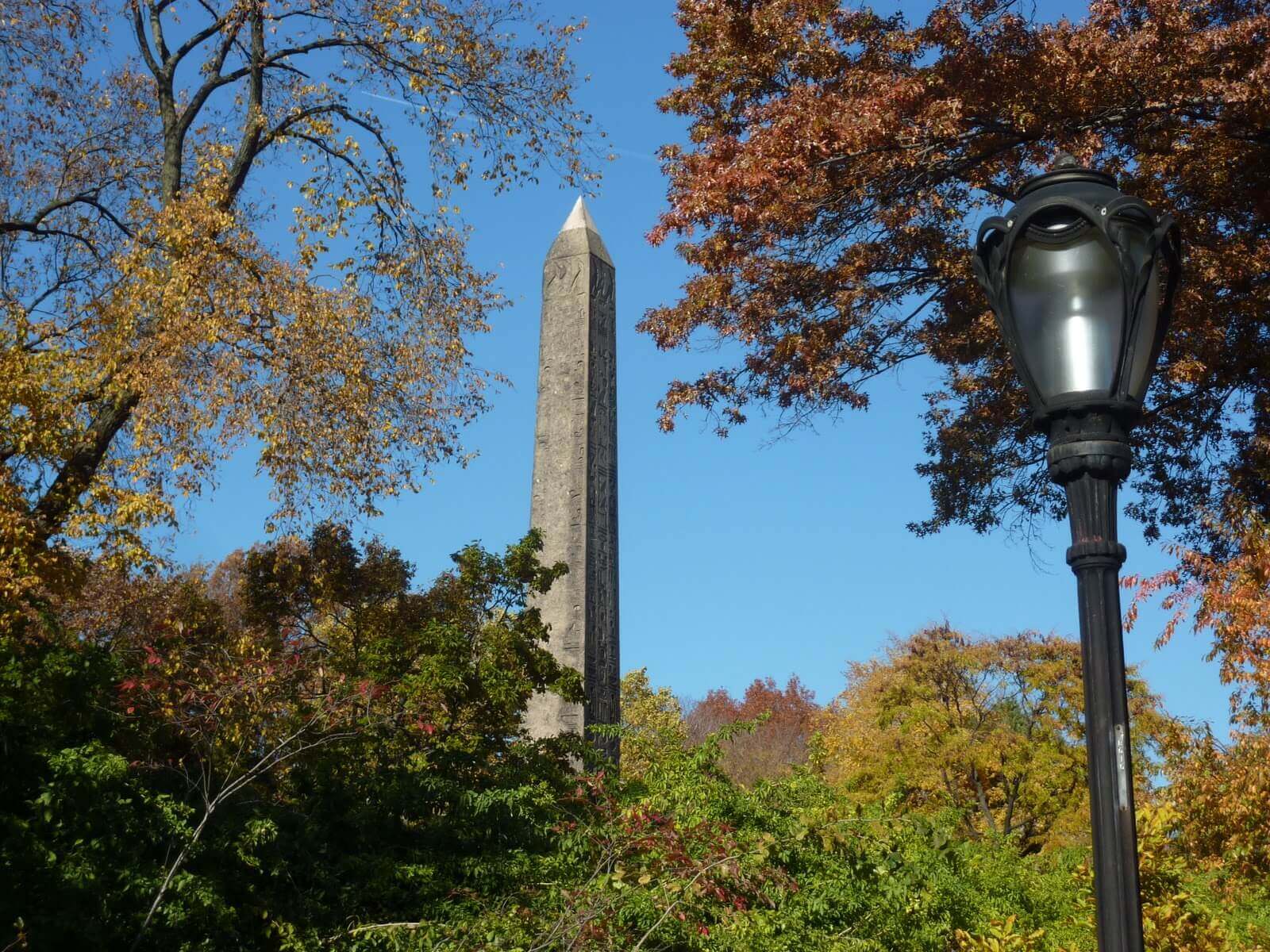 The Obelisk, AKA Cleopatra's Needle, moved to New York City from Egypt in 1881, where it became NYC's oldest outdoor monument and the oldest man-made object in Central Park.

What is an Obelisk?

An obelisk is a pillar made of stone that features a square, sometimes rectangular, shaft topped by a pyramid-shaped top. These typically tall structures are often used as landmarks or monuments.

The History of the Obelisk in Central Park

The obelisk in New York City's Central Park is one of two originally built in Egypt around 1450 BC to commemorate the 30th year of Pharaoh Thutmosis III's reign. When they were first built, the obelisks stood guard over the Temple of the Sun in Heliopolis, a city on the Nile River. In 18 BC, Roman Emperor Augustus ordered both transported downriver to Alexandria, where they sat in front of the Caesareum - a temple Cleopatra built to honor Julius Caesar or possibly Mark Antony.

Fast-forward to 1878, one obelisk made its way to London and two years later, the other found a home in New York. The gifting of the obelisks was part of a plan by Khedive Ismail, the ruler of Egypt from 1879 to 1914. Under this plan, many Egyptian artifacts were given to Westernized nations in exchange for financial aid to restore Egypt's economy.

After arriving on the banks of the Hudson River, it took 112 days for the monument to reach Greywacke Knoll, its current location in Central Park. Transportation was difficult due to the sheer weight of the obelisk; it weighs 220 tons and is 69 feet tall and its pedestal, added in Alexandria, is 27 feet tall and weighs 50 tons. The process of moving and installing the piece was arduous. First, a team of 32 horses dragged the pedestal through the city streets. Once the team accomplished that feat, it took roll boxes, a pile-driver engine, and brute force from a team of men to haul the obelisk through Manhattan on parallel beams. In spite of the commission of moving the giant obelisk, New York residents remained unfazed; a great deal of construction was happening during this time. On January 22, 1881, 10,000 New Yorkers attended the raising of the Obelisk; Central Park, NYC was quickly filling with man-made monuments and natural beauty. To add to the history of the Obelisk, workers buried a time capsule beneath it containing: a copy of the Bible, the complete works of Shakespeare, Webster's Dictionary, a copy of The Declaration of Independence, a guide to Egypt, and the 1870 Census.

How the Egyptian Obelisk Came to Central Park

When searching ancient monuments, like an Egyptian obelisk, NYC might not come to mind, but Cleopatra's Needle is one of many beautiful historical attractions the city has to offer. In addition to the Obelisk, Central Park in NYC is home to the historic Gapstow Bridge and the 107th US Infantry Memorial. Book a guided bike tour through the park online today to explore the unique history of Central Park during a ride with a top-rated guide.

Want to explore Central Park by bike on your own but don't have a ride? Bike Rental Central Park offers bike rental packages for the whole family! Online reservations are quick and convenient and give you deals you can't get anywhere else.