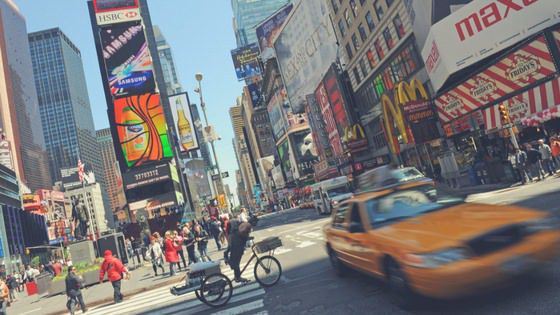 Want to go on a New York Sightseeing Tour? A Hop on, Hop off bus tour of New York City is definitely the way to go! From the comfort of a double decker bus tour you can see all the important sites that New York has to offer. If it’s worth seeing, you can see it from one of our tours. On the Downtown tour see the Empire State Building, Macy’s, Madison Square Garden, The Flatiron Building, Wall Street, Rockefeller Center and more. The Uptown tour will take you to Central Park, The Metropolitan Museum, The Frick Museum, The Guggenheim Museum as well as the world-famous Apollo Theater in Harlem. On our Bronx tour see The Cathedral of St. John the Divine, Grant’s Tomb, Riverside Church and one of the most iconic places in New York--Yankee Stadium! On our Brooklyn Tour see the Brooklyn Bridge, the Barclays Center, Grand Army Plaza and a lot, lot more. Last but certainly not least, our Night tour takes you around the city that never sleeps as it is magnificently illuminated at night. The sight of Times Square at night is one you will never forget! There are three different passes that you can purchase: The 24 Hour All City Pass includes: The Downtown Tour, The Uptown Tour, The Brooklyn Tour and The Night Tour. The 2 Day All City Super Pass includes: The Downtown Tour, The Uptown Tour, The Brooklyn Tour, The Night Tour as well as The Bronx Tour and the Liberty Cruise. The 5 Day All City Super Pass (BEST VALUE) includes: the same tours as the 2 Day All City Super Pass but can be used over a 5-day period for those visitors who have more time in the city and want to take the tours in a more leisurely fashion. On a hop on, hop off bus tour, NYC is yours to explore at your own pace. Whether you stay on the hop on, hop off bus for the entire loop or get off and on at the numerous stops is up to you. You can hop on and off as many times as you like for the duration of your pass. All Passes include the following bonus extras: FREE--2 Hours Bike rental with any bike rental purchase. FREE--Admission to the Museum of the City of New York. FREE--New York bagel breakfast at the Museum of the City of New York between the hours of 10-11 AM. The Downtown and Night Bus tours and the Liberty Cruise also sold separately.

The Manhattan downtown area encompasses some of the most iconic sights in the New York City, and our Downtown tour will introduce you to all of them. Starting from Times Square, the heart of midtown, the Downtown Tour travels south past famous landmarks, such as the Empire State Building, Radio City Music Hall, The Word Trade Center and more. Take the opportunity to explore Chinatown and Little Italy, two distinct cultural enclaves in New York City. While you are in the Financial District, pay a visit to the Charging Bull and snap some photos with this symbol of Wall Street. On the way back to Midtown, look up and you will see the newly constructed World Trade Center, which soars over a hundred stories high. With the option to hop on and hop off the bus at any one of these locations, the Downtown Tour is no doubt an exciting and convenient way to experience the essence of NYC.

Uptown Manhattan features a fascinating and refined combination of culture, education, and nature. Our tour begins along Central Park, where the beautiful trees, fields, and gardens offer a tranquil alternative to the bustling avenues. Moving through Harlem, an epicenter of African American culture, provides an opportunity to experience the distinct art and cuisine of the historic neighborhood. The small distance between 82nd and 105th Street houses New York's most impressive and world-renowned museums which together draw tens of millions of visitors every year. Known by locals as "Museum Mile," this collection of museums is considered to be one of the foremost concentrations of art and history in the world.

New York reveals its true magnificence at night when the city that never sleeps glows with millions of lights. Our double decker Night Tour takes you from Times Square down 5th Avenue to the Empire State Building, Greenwich Village, Chinatown, and Little Italy, before crossing over to Brooklyn. As the bus returns to Manhattan the Brooklyn Bridge provides a truly dazzling performance of light and architecture. After passing the United Nations, the tour continues with the Chrysler building and Grand Central Terminal, two of the most beautiful structures in the entire city. Before you know it, the bus has returned to the glamorous lights of Times Square, leaving you with a night of memories to last a lifetime!

Brooklyn remains an indespensible part of any New York adventure. Experience the city's hippest culture as our double-deckers tour all the essential sites of this iconic borough, including diverse destinations like Prospect Park, Grand Army Plaza, and the Barclays Center. The route is rounded off by a stunning view of the Manhattan skyline from across the river. As a key component of the iconic skyline, the Brooklyn Bridge remains a powerful sight well over a century after its construction.

Cruise the New York Harbor while getting a close look at the Statue of Liberty and the iconic Manhattan skyline right from the water! Don't miss the oppurtunity to see South Street Seaport, which houses a fascinating collection of antique ships from throughout the city's history. Relaxing, fun, and informative, the Liberty Cruise offers an unbeatable way to see the sights while enjoying the ride!

Located along the Museum Mile section of Fifth Avenue, the Museum of the City of New York chronicles local culture through an array of exhibitions, interactive programs, publications, and other media. Founded in 1923 and housed in a landmark building, the nonprofit museum hosts temporary exhibitions to complement extensive permanent collections. Hallways and gallery spaces invite guests inside to study historic maps, photographs of life and architecture, and artwork, as well as vintage displays gathering toys, fashion, and furniture—providing more insight into the city's rich character than the diary of Al Pacino.

The Maine Monument commemorates the 260 American sailors who perished in 1898 when the USS Maine exp...

Hallett Nature Sanctuary is a four-acre nature preserve that is located just northwest of the Pond a...