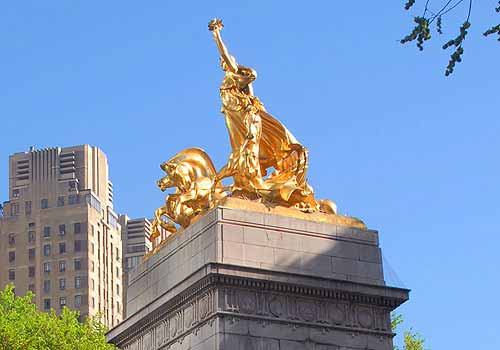 The Maine Monument commemorates the 260 American sailors who perished in 1898 when the USS Maine exploded while the ship was in Havana harbor.

Though the cause of the explosion remains unknown, many (including popular New York City newspapers) blamed Spain for the attack. The event was a catalyst that accelerated a diplomatic impasse between the United States and Spain, and the United States Congress declared war on Spain on April 25th, 1898. The war would last 8 months. Newspaper publisher William Randolph Hearst called for a public memorial to the Maine, and the sculpture was dedicated in 1913. Located at the southwest corner of Central Park at the Merchants' Gate entrance to the park, the monument consists of a pylon with a fountain at its base and sculptures surrounding it said to be cast from metal recovered from the guns of the Maine itself.