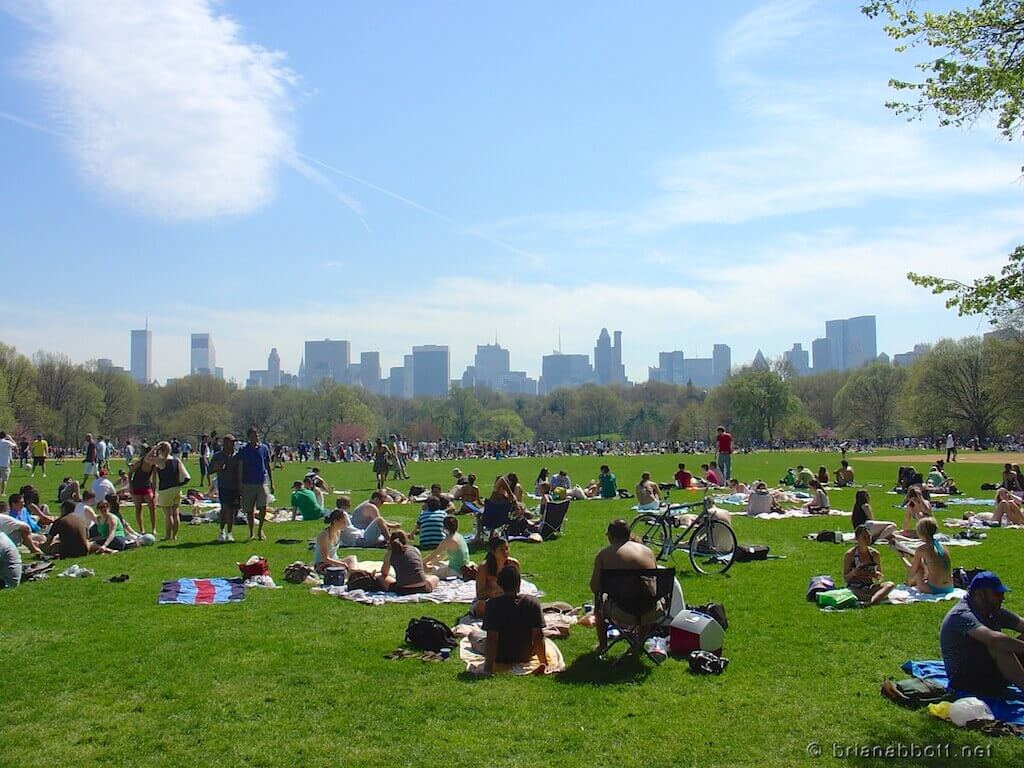 The constructors of Central Park originally imagined the field as a parade ground for military drills and exhibitions, but Vaux and Olmsted had different ideas for Sheep Meadow. New York had enough hubs for hustle and bustle; it needed a sanctuary for relaxation. Thus, against initial plans, the 15 acres of Sheep Meadow became a quiet zone where families could kick back, fly kites, and picnic.

It took much capital and labor to transform the meadow into the builders’ vision. Rocks, swamp, and small communities were uprooted to create the haven. In Central Park, Sheep Meadow was actually the most expensive landscaping project.

At first, Sheep Meadow went by the monikers “The Green” and “The Commons.” In 1864, Vaux had pedigreed Southdown sheep purchased and moved to a Victorian building near the meadow. Each day, the sheep were free to graze on the grass of the field, earning it the new name Sheep Meadow. In the 1930s, the park commissioner renovated the sheep’s home into a tavern, now the iconic Tavern on the Green, and moved the sheep to Prospect Park.

Where Is Sheep Meadow in Central Park?

Sheep Meadow is located in the southwest part of the park at 1802 65th Street Transverse, New York, NY 10065. It occupies the field north of 65th Street.

How to Get to Sheep Meadow

Central Park has several subway stops along its perimeter, with the closest to Sheep Meadow being 59th Street Columbus Circle and 72nd Street. You can also reach Central Park by taxi or, our recommendation, by bike.

When visiting, note that Sheep Meadow is open only from 11 am to 7 pm from April or May to mid-October. It closes in the winter for landscape upkeep in preparation for the warmer months, when up to 30,000 visitors a day might pass through Sheep Meadow.

What better way could there be to experience all of Central Park than by bicycle? Its 2.5-mile length is easily accessible when you have wheels, and the network of drives through the park allows you to ride by the highlights without trouble. Bike Rental Central Park offers various bicycle sizes and accessories that you can rent for as little as one hour to as long as one day.

Bike Rental Central Park has three convenient locations in Manhattan around Central Park, so you can book a ride online and pick up your rental right near the park. In addition to great deals on top-rated bike rentals, we have tour packages for Central Park, Brooklyn, Harlem, and NYC at night. All four tours include a bicycle rental in the price.

A tour with us is an exciting adventure to the best sightseeing spots in the city. On a guided tour of Central Park, our expert guides traverse 7 miles in two hours with you, filling you in on the history and fun facts of the best attractions. Maybe yours will tell you about more about the colorful history of Sheep Meadow: In Central Park of the 1960s, for instance, Sheep Meadow was, for all of its tranquility now, a center for the countercultural movement that saw anti-war protests, peace rallies, draft card burnings, and more. Fun facts like this await when you take a tour with our experienced guides.