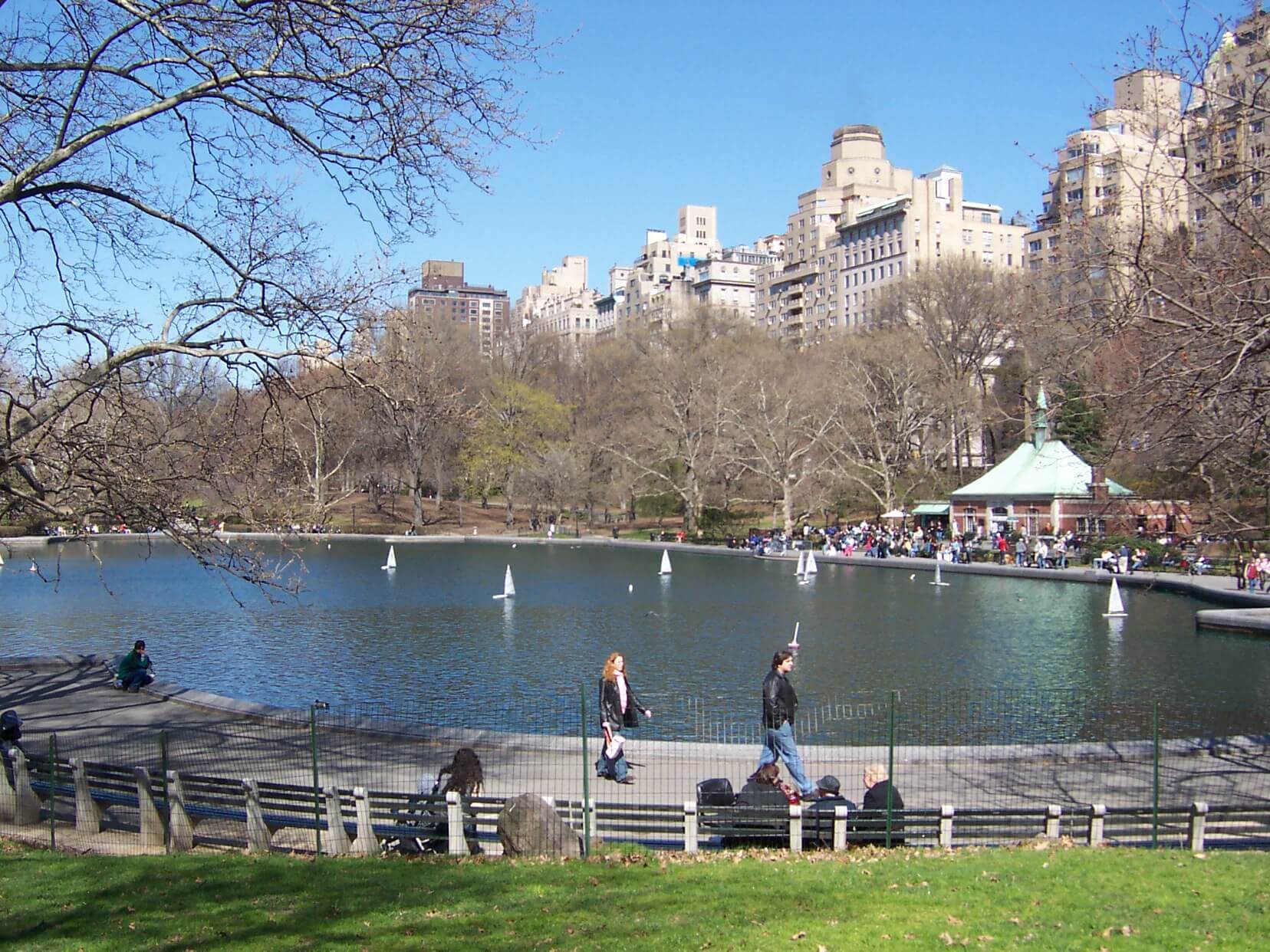 This area is popular with families and children because of its famous climbing sculptures.

Not an original part of Olmsted and Vaux's plan for the Park, Conservatory Water was initially intended to be a small pool for a glass house and formal, ornamental flower garden. When the upkeep of this plan proved itself too costly, Conservatory Water and Conservatory Garden were created in its place. Instead, where an ornamental flower bed of tender annuals had been planned, a naturalistic pond displaying water lilies was excavated. The steep bank towards Fifth Avenue was densely planted with shrubs and trees, including birch—for quick cover—and copper beech. The water was supplied from The Ramble and Lake which once flowed through here, on its way to the East River. The general shape of this pond was oval, with winding, irregular shores, bounded by a high bank on the east side and a great willow drooping over the north end. Rocks were disposed in the immediate banks, so as to suggest a natural formation, rather than an artificial pond. The bottom, scarcely three feet deep, was cemented tight as a cup, and the water flowed gently in at one end, and out at the other, and so through a basin and into the sewer. Inspired by the model boat ponds of late 19th century, the waterlily pond was reshaped as a model boat pond similar to that in the Jardin du Luxembourg, Paris.


The Conservatory Water is known for its storytelling programs, model boats and cafe. From spring through fall, children and boat enthusiasts come to navigate radio and wind-powered vessels across the sparkling waters. It's such a popular destination that writer E.B. White set the whimsical boat scene in his children's classic, Stuart Little, here. It was recreated in the 1999 film of the same name. In the coldest winter months, the pond's water level is frequently lowered for free public ice skating and in the summer, the beloved Hans Christian Andersen statue west of the pond is home to a children's storytelling series. In the sculptured Beaux-Arts pediment of an upper-floor window of 927 Fifth Avenue, overlooking Conservatory Water, the Red-tailed Hawk named "Pale Male" has set up a nest, under the watchful eyes of the Park's numerous bird-watchers. The waters of Conservatory Water shelter a seasonal population of unusual freshwater jellyfish. Surrounded by the pink and white blossoms of spring blooming cherry trees, Conservatory Water holds its boating season from April to October each year. Boat rentals are available at the Kerbs Memorial Boathouse, as are lessons for the budding model boat enthusiast.