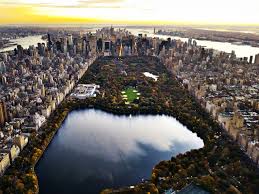 With so many things to do in NYC's Central Park, the reservoir is one place that deserves a top spot on your adventure list. The Central Park reservoir has a long and fascinating history that begs exploring. When you're ready to see it for yourself, we can help: Our top-rated bicycle tours are not only safe and easy, but they are one of the best ways to see Central Park. The reservoir is waiting for you to explore!

Central Park had a reservoir when the park was originally created in 1853, although this reservoir was largely utilitarian with few features to make it appealing. In fact, Frederick Law Olmsted, the park's designer, worked to hide the reservoir behind hills and plants. Eventually, as New York City's population continued to grow, building a new reservoir became necessary. The Central Park reservoir was built between 1858 and 1862 as a temporary water supply for the Big Apple. The reservoir was once an important part of NYC's fresh water system, helping to distribute water throughout Manhattan, but in 1993, the reservoir was decommissioned when it was determined to be obsolete after the installation of a new water main.

The reservoir was originally called the Central Park Reservoir, but in 1994, the name was changed to the Jacqueline Kennedy Onassis Reservoir. It is also commonly called simply the Jacqueline Onassis reservoir. Central Park visitors enjoy biking and jogging on the 1.58-mile loop around the reservoir, which is 106 acres in area. The running track around the water is called the Stephanie and Fred Shuman Running Track, and it was reopened in 2015 after renovations.

Things to See Around the Central Park Reservoir

Savvy tourists will find many reasons to check out the reservoir. Central Park in the spring is certainly a sight to behold: If you're in NYC in the springtime, you'll want to see the Yoshino cherry trees planted around the reservoir. When these trees burst forth in a riot of pink blossoms, the result is a feast for both the eyes and the nose! The views of the skyline from different spots around the reservoir are also breathtaking. As you meander around the reservoir, you can look forward to seeing the ornate cast-iron Gothic bridge situated on the reservoir's north side. Keep your eyes peeled for the waterbirds that make their home around this body of water, too!

A Bike Tour of Central Park

With so much ground to cover in Central Park and so many things to see, one of the best ways to make sure you see the best attractions is to take a bike tour. At Bike Rental Central Park, our top-rated bikes are safe and comfortable, so you can enjoy a worry-free excursion. You can explore the park at your own pace and have an adventure to remember! Hop off your bike to ride the carousel, have a picnic, or further explore the reservoir. You might also choose a guided tour led by a local expert who can show you all of the ins and outs of the park. Central Park's top sights will be at your fingertips!

The Mall and Literary Walk