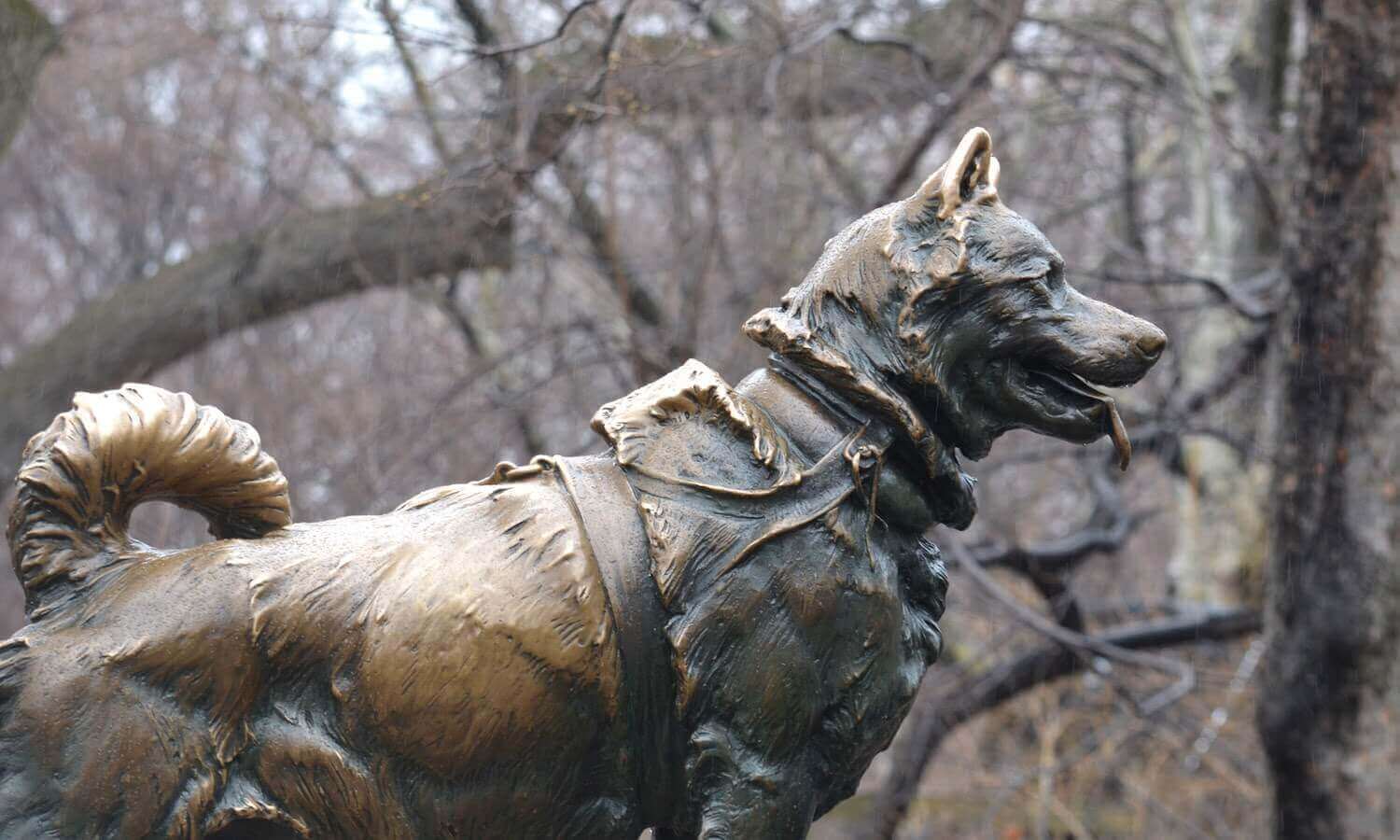 If you’ve never seen the Balto statue in its Central Park location, this sculpture is worth a visit. It’s a one-of-a-kind tribute, actually the only one of its kind in all of New York City. The statue of Balto the Dog in Central Park has an entertaining story behind it, which has inspired people to come visit it from all over the world.

History Behind the Balto Statue in New York

A Siberian husky named Balto was born in Nome, Alaska, in 1923. Balto worked hard as part of a dog team in Alaska, but he was considered slow and inferior. Balto worked with other dogs to transport supplies to miners working in the area. In early 1925, some children in Nome came down with diphtheria. Without proper and timely treatment, diphtheria would lead to difficulty swallowing and breathing, often causing patients to suffocate. As the disease would spread through the body, people often had other life-threatening complications as well. Because diphtheria is highly contagious, it was imperative that Nome doctors get an antitoxin to fight the disease and keep it from spreading.

Unfortunately, this medicine was only located in Anchorage, which was almost 1,000 miles away from Nome. A train could take the medicine part of the way, to Nenana, but additional transportation would be needed to get it all the way to Nome. Ice prevented ships from running to Nome, and blizzards made it impossible for planes to get there. The only option was to have a relay of dogsled teams move the medicine over the frozen Alaskan tundra. This process would probably take as long as 13 days.

Doctors packed the medicine carefully and wrapped it in warm quilts. The train left Anchorage on Jan. 26, 1925, and it arrived in Nenana on Jan. 27. The first dog team received the medicine and began the long journey. More than 20 different mushers and their respective dog teams helped with this relay effort. They traveled in temperatures that never rose above -40 degrees Fahrenheit, with severe winds whipping almost constantly. On Feb. 1, 1925, the medicine was passed to musher Gunnar Kassen and his dog team, led by Balto, for the final leg of the journey.

A blizzard set in soon after, and the weather deteriorated, becoming more and more dangerous. Kassan couldn’t lead his team and soon gave up. It was then that Balto took over to lead the team through the blizzard to reach Nome. It took the team 20 hours to travel 53 miles. When they arrived early in the morning on Feb. 2, the dogs were exhausted. But the entire relay had taken only seven days instead of the projected 13.

Balto became an instant celebrity. Interviews, movies, and tours followed. Then, F.G. Roth created a bronze likeness of Balto, which still stands in Central Park today. The Balto statue in New York is the only one that commemorates a dog. The bronze sculpture was dedicated that same year, on Dec. 17. Balto was present for the monument’s unveiling.

Where is the Balto statue? You’ll find it easily as you explore Central Park. The statue is located on the main path leading north from the Tisch Children’s Zoo. Stopping for a picture or to read the plaque promises to be memorable. Book reservations online with Bike Rental Central Park for a bike tour through Central Park and your guided tour on our safe and comfortable bikes will take you to all of the best park landmarks on your New York City adventure, including this one.