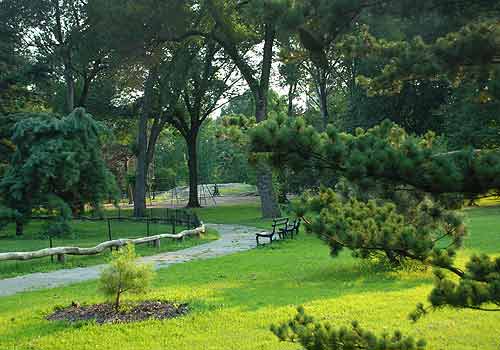 In the original plan for Central Park, evergreen trees enjoyed a place of prominence. Designers Olmstead and Vaux included pine, spruce, and fir trees in the original "Winter Drive" along the park's west side, stretching from 72nd to 102nd streets. But by the close of the 19th century, the evergreens were dying and being replaced with deciduous trees, such as elms. In 1971, a man named Arthur Ross decided to act to bring back the evergreens, and the result was the Arthur Ross Pinetum.

Ross was a philanthropist, investment broker, and frequent walker in Central Park. It was while taking one of these walks that Ross decided something needed to be done about the eyesore just south of the 86th Street Transverse, consisting of mostly shabby lawns and decrepit buildings.

After Ross brought his idea to Central Park's chief forester, Cornelius O'Shea, in 1971, the Arthur Ross Pinetum began to take shape with an initial planting of 35 trees. Despite early vandalism, Ross's addition of 35 trees per year has resulted in an area filled with evergreens that have continued to grow in stature and popularity. It includes pine trees from places as far away as Japan, Macedonia, and the Himalayas.

By 1978, Ross had convinced Parks Commissioner Gordon J. Davis and park administrator Elizabeth Barlow to authorize an expansion the Pinetum into a four-acre sanctuary located just northwest of the Great Lawn. He also convinced them to expand the variety of conifers. Today, the Arthur Ross Pinetum consists of conifers from around the world. Upon Ross's death in 2007, it boasted more than 600 trees. During the summer, it's a nice place for a picnic, and in the winter, its snow-covered boughs make it a true winter wonderland. In any season, it's a beautiful place to visit on a bicycle.

The playground does nothing to detract from sightseers' enjoyment of the statuesque conifers and rocky outcroppings of the Pinetum. In fact, with its unpaved walkways and no fence to interfere with the scenery, the playground blends in seamlessly and is enjoyed by children and adults alike. The picnic tables and expansive lawns make it the perfect spot for a family picnic.

Ready to enjoy the beauty of Central Park? Book one of our bike tours to see it all with an expert guide. If you prefer, you can also rent a bike, which includes a helmet and chain lock, and go off on your own. Now that you know the history of the Pinetum, you're sure to enjoy a grand tour whichever way you decide to go.