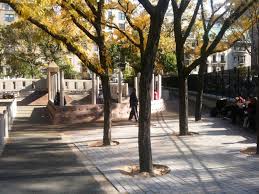 Despite its name, Ancient Playground is one of the Park's most recently reconstructed playgrounds.

Great for preschool and school-age kids, located just north of the Metropolitan Museum of Art, the playground's climbing pyramids, obelisk and sundial were inspired by the museum's collection of Egyptian Art. This site is one of the many adventure playgrounds built in New York City throughout the 1960s and 70s. The playgrounds were inspired by European children, who created their own play equipment using the rubble and debris left behind in cities bombed during World War II (1939-45). This phenomenon was incorporated into British and Scandinavian playlots, which were designed to encourage children to modify their surroundings, thereby creating a more participatory play environment. These parks were a radical departure from the playgrounds built under the direction of Parks Commissioner Robert Moses. Although Moses increased the number and overall quality of the City’s playgrounds, he built virtually all of them with standardized slides, swings, and climbing bars that were criticized for their uniformity. These antiseptic Moses structures inspired the creation of parks such as Ancient Playground, which invokes Egyptian themes in its play equipment and the use of sand and water.