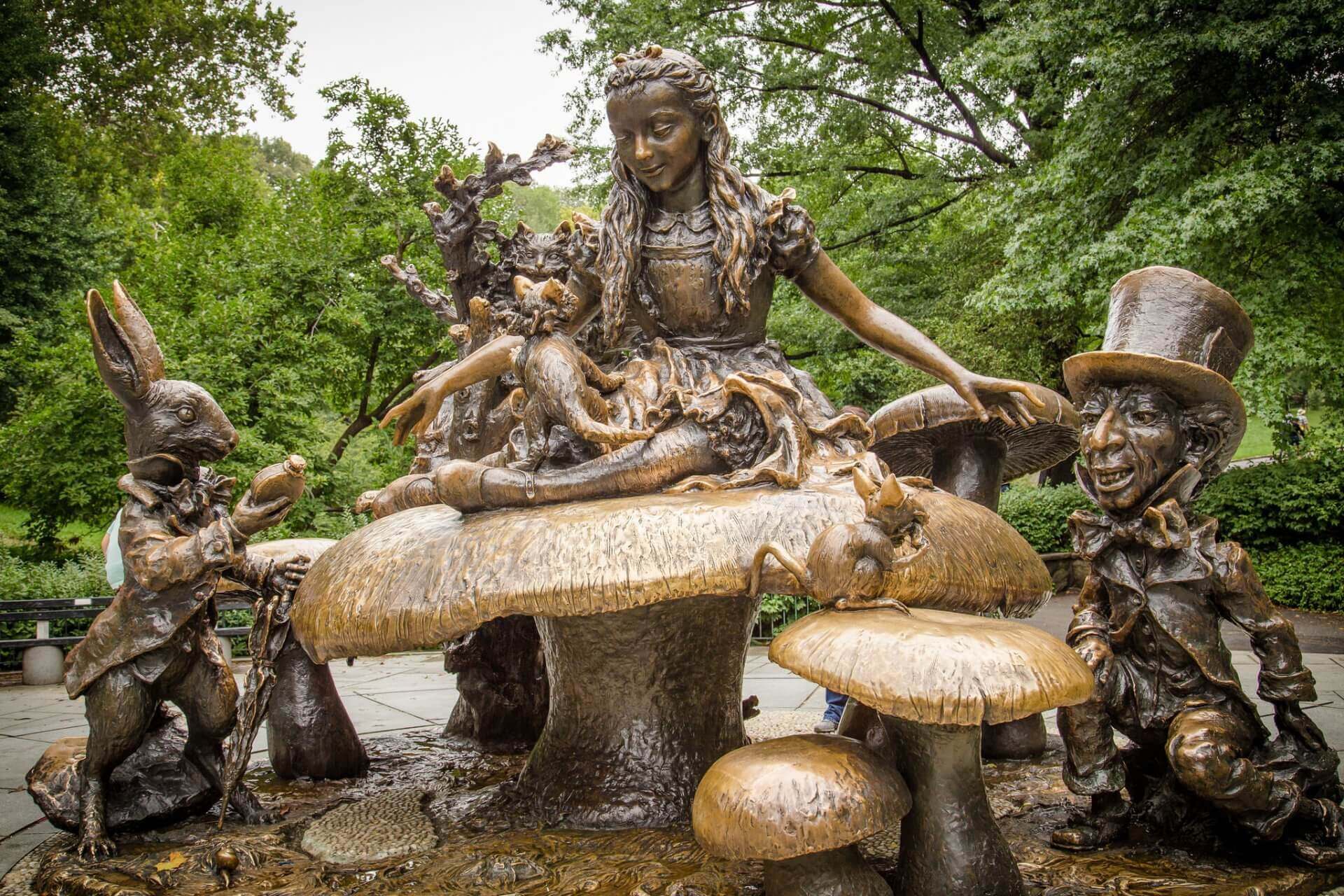 The Alice in Wonderland Monument: Central Park’s Most Kid-Friendly Sculpture

The Alice in Wonderland statue in Central Park is one of the most popular out of the dozens that stand throughout the park. It is a depiction of a scene from Lewis Carroll’s classic novel, Alice’s Adventures in Wonderland, and shows the protagonist, Alice, sitting on top of a mushroom and reaching out to grasp the White Rabbit’s pocketwatch. The Mad Hatter stands beside her, looking like he could burst into hysterical laughter at any given moment, while the famed Cheshire Cat looks intently over Alice’s shoulder at the scene before him. At the base of the sculpture are engraved words from the first lines of a quirky and nonsensical poem by Lewis Carroll called Jabberwocky. This sculpture is a must-see attraction for any fan of Disney movies, classic literature, or Alice in Wonderland.

Central Park received the Alice in Wonderland statue in 1959. It was sculpted by José de Creeft and commissioned by George Delacorte in honor of Delacorte’s late wife, Margarita. Delacorte then donated it as a gift to the children living in New York City. More than 50 years after the installation of the Alice in Wonderland sculpture, Central Park, New York, visitors continue to make visiting it part of their itinerary, especially if they have children in tow. To this day, children from all over love hiding in it, climbing on it, using it as a basis for their make-believe games, and enjoying the textures of the sculpture. The 11-foot-tall bronze statue has become glossy in places due to the number of tiny hands that have touched it over the years, only adding to the statue’s character and charm. Stories like this classic tale are not just for kids, however! The Alice in Wonderland statue in Central Park is a beautiful and intricately designed sculpture that attracts people of all ages.

If you’re looking to see the Central Park Alice in Wonderland sculpture in person, one of the best ways to do so and take in all of the other great sights in the park, too, is on two wheels. When you rent a bike with us, you’ll get everything you need to see the Alice in Wonderland Central Park statue, including a top-quality bike, helmet, and lock. And when you book a guided bike tour, you’ll get to see and learn about the Central Park Alice in Wonderland sculpture as well as a multitude of other famous and historic landmarks from the safe trails of the park, led by an experienced city local who knows all of the ins and outs of the park. We’ll help you take in beautiful, lush views of the park’s flora and fauna and see places where movies were filmed.

Best of all, when you book online in advance, you’ll get the lowest possible price. Reserve a spot in one tour or multiple outings, or just book a bike rental and set off on your own to see the Alice in Wonderland sculpture in Central Park. Either way, you’ll have the opportunity to explore the sights by bike and save money while doing it.