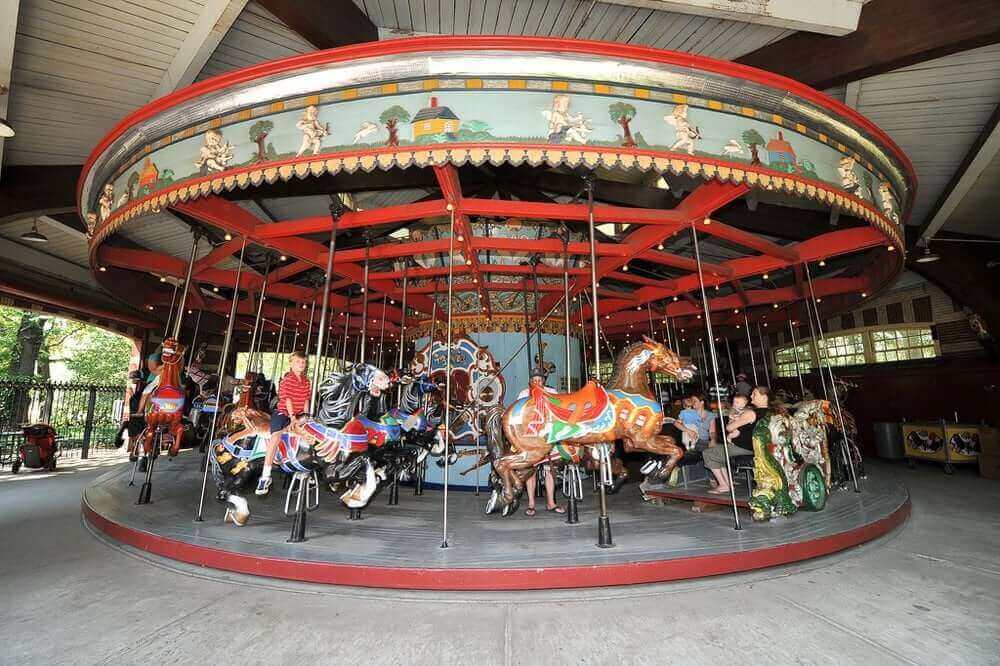 The Carousel, with its magnificent horses is one of the Park's most popular attractions.

Since the original installation of the carousel in Central Park, New York City has installed three more models for patrons to enjoy in the same Central Park carousel location, just off the 65th Street Transverse near the Heckscher Ballfields. The first carousel served the city until 1924. The current model is one of the biggest carousels in the country. With 57 hand-carved horses and two chariots, there’s a lot of distinctive character in this carousel. NYC Central Park officials have performed extensive maintenance and repairs to make sure that the merry-go-round remains in good condition for patrons of all ages. In 1990, the Central Park Conservancy performed an extensive upgrade to the carousel plaza. Each horse gets the individual attention it needs to keep all of them in optimal working order.

There have been lots of changes over the years to the New York carousel. Central Park technology was very limited back in the 19th century. The first carousel actually ran on animal power: A mule and a horse were in a basement space beneath the carousel, hitched to a central pole. The operator tapped the floor to signal the animals when to start and stop. Eventually, this carousel was replaced by steam-powered carousels.

The Carousel in Central Park Today

When you are planning a New York City vacation, one thing you won’t want to miss is an excursion through Central Park with a stop at the carousel for a ride or two. The carousel is open for rides every day of the week, and about 250,000 people climb aboard a horse or a chariot every year. Join these happy patrons and experience this traditional NYC attraction: It’s simple with our bike rentals. At Bike Rental Central Park, you can purchase an all-inclusive rental package that will give you the time and opportunity to explore Central Park at your leisure. Imagine exploring the entire park, taking in gardens, fountains, playgrounds, the zoo, and more. The carousel awaits you, too, with rides available between 10 am and 6 pm daily.

Explore and Enjoy With Our Bike Rental Packages

Our packages include everything you’ll need for a fun day in the park. We have many different bikes available in sizes to fit everyone in the family, from kids to adults. You’ll also get a helmet, chain lock, and map with every rental. When you book your reservation online, you’ll get the best possible pricing, including special online-only discounts. You’ll receive a voucher with your purchase, which you can exchange for tickets once you get to NYC anytime within the following six months. Don’t miss this opportunity to tour Central Park in a way you’ll never forget!